I wake early to the lament of the ground hornbill as they pick their way across the Timbitene Plain in the Kruger National Park. Doo, doo, doo-doo calls one gently. Dow, dow, dow-dow-dow replies the other. I sit up in my bed and quietly lift the front of my tarpaulin tent so that I might watch them walk in their funny way across the plain. It is a privilege which fills my chest and after they have passed, I snuggle back into bed and whisper to myself “Doo, doo, doo-doo. Dow, dow, dow-dow-dow” as I fall back asleep. 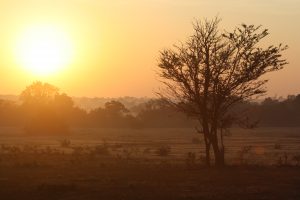 One of the most beautiful and haunting sounds – click here to listen to the Southern Ground Hornbill at dawn, shown here with nesting chick.

We set out early the next day as dawn breaks on a Rhino Walking Safari from Plains Tented Camp in the Kruger National park, tracking our beloved friend the Southern Ground Hornbill. Dodo-like in many aspects, Ground Hornbill once reached critically low numbers in Africa. Despite the dedicated efforts of several conservation projects, their numbers are dropping vulnerably to endangered. The Mabula Ground Hornbill Project cites that there are currently only 1500 Ground Hornbill left in South Africa. You may still be lucky enough to encounter these surprising birds roaming freely in the Kruger National Park and in the Hluhluwe-iMfolozi Game Reserve in KwaZulu-Natal. Some of the hand-reared ones even lumber towards stopping cars, unafraid of humans and hoping to say hello. 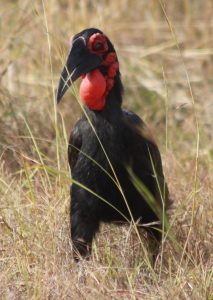 I love their funny way of walking towards one

Here are some interesting facts about this fascinating bird:

Southern Ground Hornbills are endemic to sub-Saharan Africa. The Mabula Ground-Hornbill Project is working to slow the decline by:

My heart stops on our walking safari, as in a clearing not far from the main camp we come across these funny creatures walking in their considered way across the veld. It is a family of three, dad with bright red wattle and face, Mom and Junior are darker in colour. They are not comfortable with our presence, being completely wild in this untouched area of the Park. I am a little pleased about seeing them being so guarded and I send out a silent blessing in their language to encourage them to continue being careful parents. We back away respectfully and let them get on with the important business of living out their full days in protection and peace.