The cursed battle of Isandlwana September 6, 2014

As we drive into the battlefield of Isandlwana my skin prickles and the phrase keeps coming into my head “This is where it really happened.” The first thing I notice is a poignant pile of white stones commemorating a burial that took place on this site. I soon learn that this pile of stones is not a memorial to one death, but a mass grave where many soldiers were buried. Next I notice another pile of stones nearby, then another, and another, until suddenly I pan out and the full horror of the extent of losses hits me as I become aware of hundreds of piles of stones spread out across several square kilometres.

We are spellbound by the story of this battle, where, amidst African bushveld heat of over 40 degrees, with oddly formed posse moving in different directions, a chaos of communication ensued, leading to a massacre of thousands of British soldiers by well-trained Zulu impis (soldiers) and nezinsizwa (warlords). 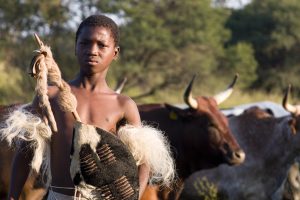 Enraged by a ruthless attack on Zulu children herding cattle, where British scouts were said to be laughing while chasing and killing the young boys, the battle started earlier than planned as Zulu warriors immediately revenged. They did so even on an auspicious day when their beliefs determined that they should have waited until the following dawn to strike. Using King Shaka’s lethal “horns of Africa” circling strategy, a Zulu chieftan was heard to shout out, as he passed clean behind one stranded British regiment, “Don’t worry boys, we will be back for you soon!”

The battle is bloody, with British soldiers disembowelled, ostensibly an act of dignity, to release their spirits, rather than leaving their victims’ souls trapped in an engorged, rotting body. As the battle draws to a close, it is said that there was a partial eclipse of the sun, and one can only imagine how this was experienced by those present.

In the heat and in the wilds of rural KwaZulu-Natal, the bodies were soon unrecognisable, hence the mass graves marked by piles of white stones. 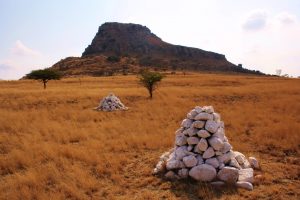 As we finish listening to these stories, as told by experienced guide Mike Nel of Zululand Tours, a hush comes over our party, and we each spontaneously move apart, walking alone across the veld. A cloud moves across the sun as we solemnly make our way in solitude past the memorial markings of a strange and surely cursed day in history – cursed for the British who lost so many men, and cursed for the Zulu Nation, about to suffer an equally devastating defeat soon thereafter at Rorke’s Drift. 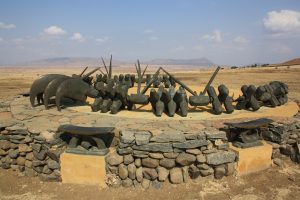 Memorial of traditional Zulu warrior’s necklace, commemorating the losses suffered in this battle