“Wouldn’t an elephant just walk over us?” The incredible days at Rhino Post Safari’s Plains Camp by Inka Cee, translated by Hauke Walden.

For a version in German language please refer to http://blickgewinkelt.de/rhino-walking-safari-suedafrikas-krueger-nationalpark (Deutsche Version).

We do not get much sleep these days. In the evenings, we’re lying awake, listening to the sound of the bushland. Was that a growl? Did you here that cracking noise?

Walking on foot through the bushland, that was something I did not want to miss out on our Roundtrip through South-Africa. Walking on foot, that means: slower, more intense, and one with nature.

We found our favourite place close to Sabi Sands in the Kruger National Park: The Plains Camp, an outpost of the Rhino Post Safari Lodge, which belongs to the Isibindi Africa Lodges. 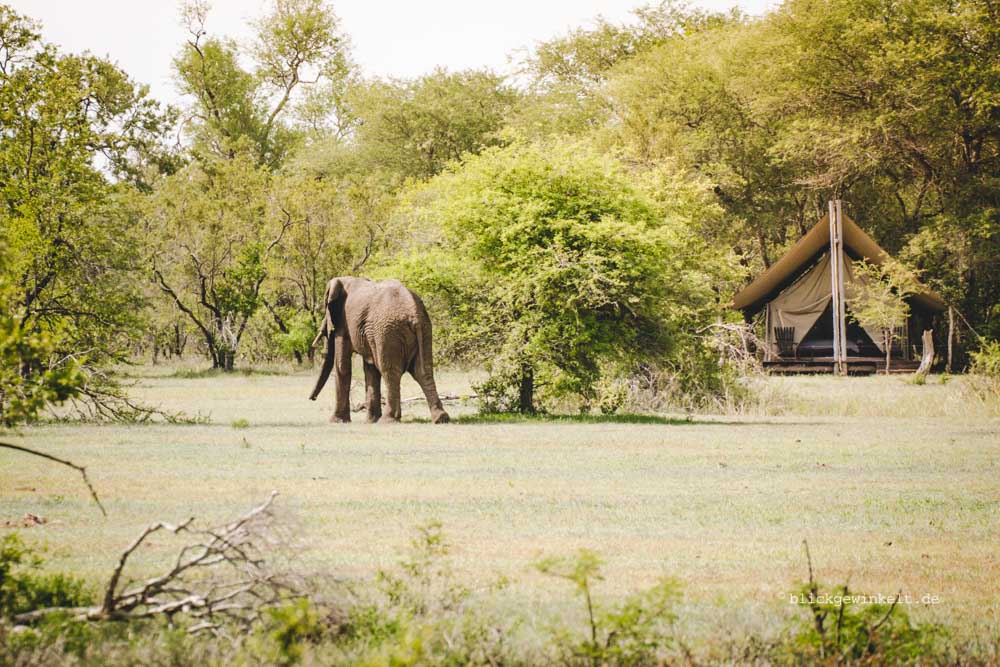 The perfect welcome – a sight to remember.

The Plains Camp of the Rhino Post Safari Lodge

The “dining room” of Plains Camp, which is in fact a big open tent surrounded by a wooden terrace, is located in front of a wide open plain (hence the name, I guess). At noon we relax in the beautiful old leather chairs, looking at the zebras or apes, which would normally just ignore us – but who would sometimes get curious and get as close as 200 meters to the camp. 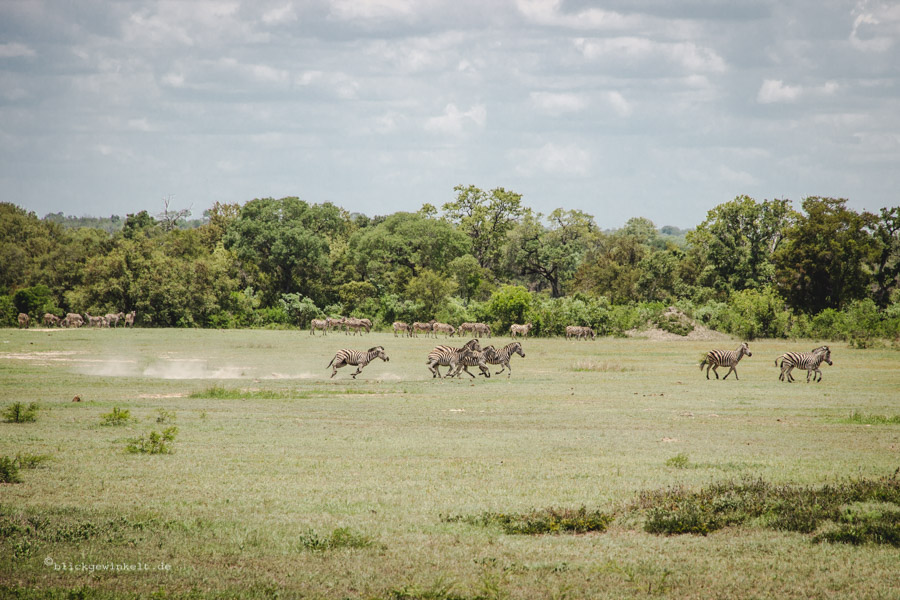 Putting up a show – or ignoring us Plains Tented Camp – could be a film set

Both late in the afternoon, and on every morning, the elephant herd comes to the watering place. The afternoon walk is perfectly timed so we get to watch the magnificent African sunset. 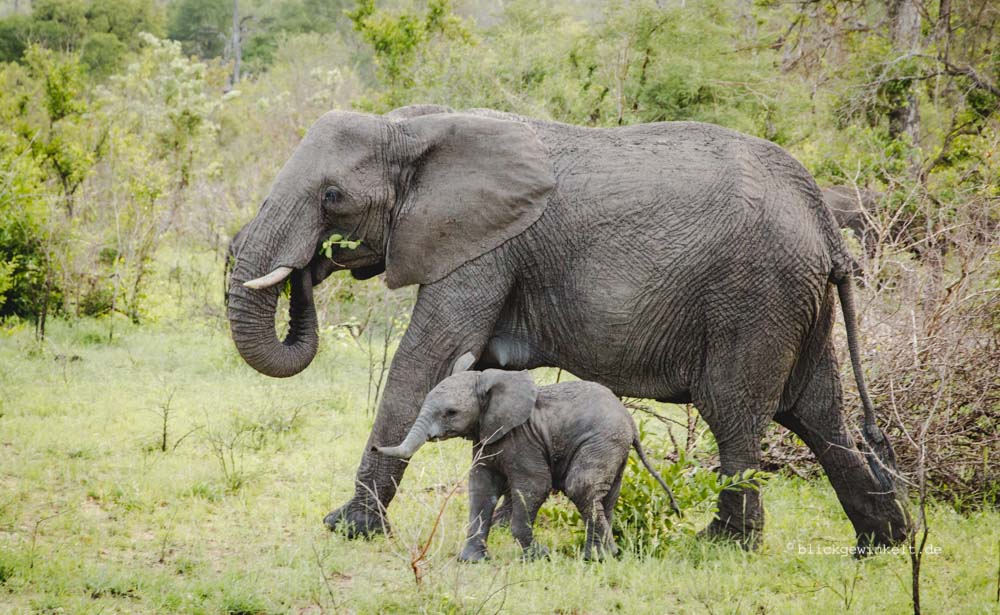 Elephant baby! It does not get more “Awwww!” than that.

Here at the Plains Camp, the African Safari dream becomes true, paired with the luxury of old colonial times, with a tad of kitsch here and there. The old binoculars, the cracked old leather suitcases, the kerosene lamp – it all adds to the atmosphere, and we cannot help but must re-enact that famous scene from, well, guess what film … 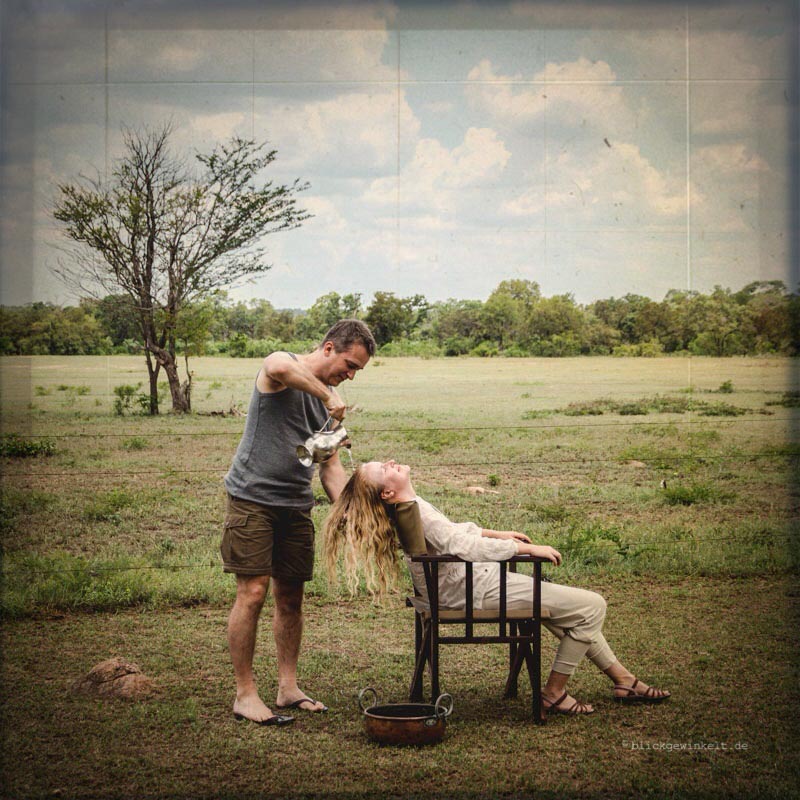 Him not Robert Redford, I not Meryl Streep – but the scenery is perfect!

At night we sleep in luxury tents, having one tent for two persons, and altogether there are only four of them (aside from the tents for the staff). The tents are hidden under the trees, and at night, we have the feeling we’re all alone in the middle of nowhere.

“Wouldn’t an elephant just walk over such a tent without even noticing?”, we ask ourselves, without really wanting to know the answer. We guess: Theoretically they could, practically we’d probably wake up from the noise, and anyway – why should they? As a last resort, we still have that air pressure horn we got from our guide (“Mind you, they are NOT for ordering drinks!”) which we could use in case we’d need help. 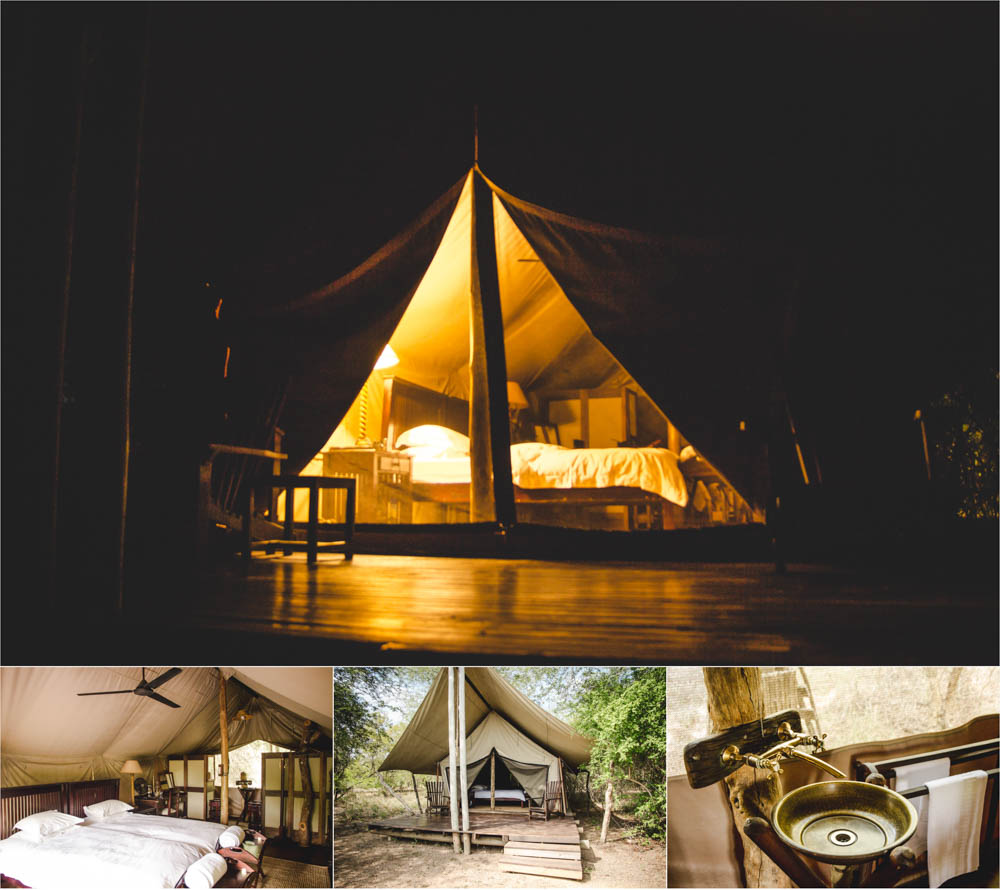 Electricity and a shower with warm water – that’s glamping, not camping

Altogether, we are only 8 guests. No kids, they have to be at least 12 years old when visiting the Plains Camp, which seems to make sense because there no fences holding curious kids in- and just-as-curious animals outside.

Also, you don’t go here just to sit on the porch or attend the pool – even though it’s the pool with one of the most spectacular views I have ever seen. 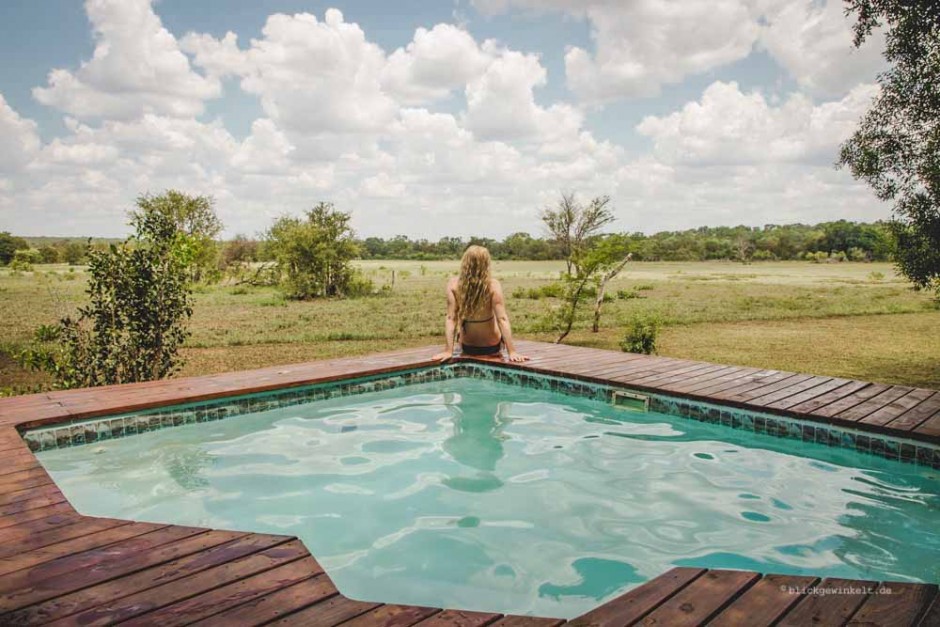 That pool! That view!

Early in the morning and late in the afternoon we take longer walks, the Walking Safaris. And at least for one night you should stay in the Treehouse-Camp, the Sleep Out.

Tenting in the trees

The weather is a little unstable, so our guide Doug decides we should rather take the Land Rover to the treehouse camp, just in case the rain pours down to heavy, because the tents in the tree are kind of open to the sides – when it rains, you get wet. And you stay hungry, because the food is prepared (of course) on an open fire.

So we’re missing that kick to be a two-hour-walk away from the next human beings in the middle of the bush, alone among wild animals. Call me a little romantic.

Fantastic view from the treetop.

The drive with the car takes a little over half an hour. After that, Doug walks us through the bush to make up for the cancelled walk from the base to the sleep out. The advantage is: We do not even need to carry a toothbrush with us.

40 meters away from a huge herd of buffalos I’m wondering how Doug can have such great trust in the peacefulness of these big animals, because even though both guides are carrying a rifle with an impressive calibre, you probably can’t do much if a few hundred animals would decide to go after you.

However – why should they? As long as you don’t threaten them, it just does not make any sense for them to attack you. One member of our group is always hiding a little behind her husband, since she’s wearing a rather pink shirt, even though Doug had told us beforehand that we should watch the color of our clothing.

Albino, our tracker, just stands by and smiles. He makes few signs and talks even less, maybe he does not speak english, or is just to polite to interfere. We are wondering how he got that somewhat strange sounding name, and decide that he’s probably just using it to make it easier for us tourists. Giraffes – the animal with maybe the coolest moves in the bush 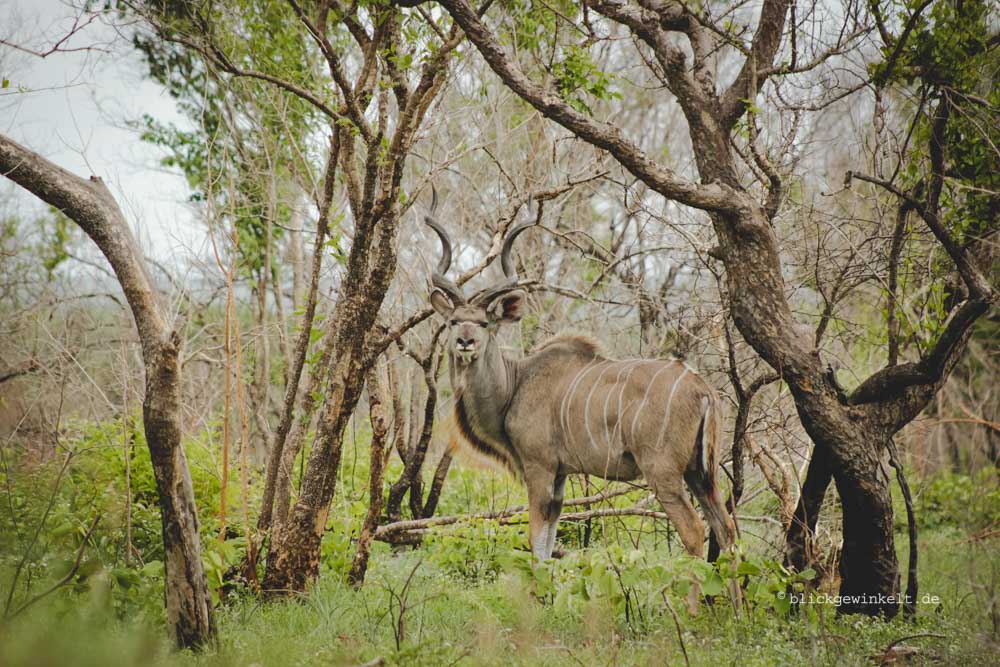 A master in camouflage – a male Kudu 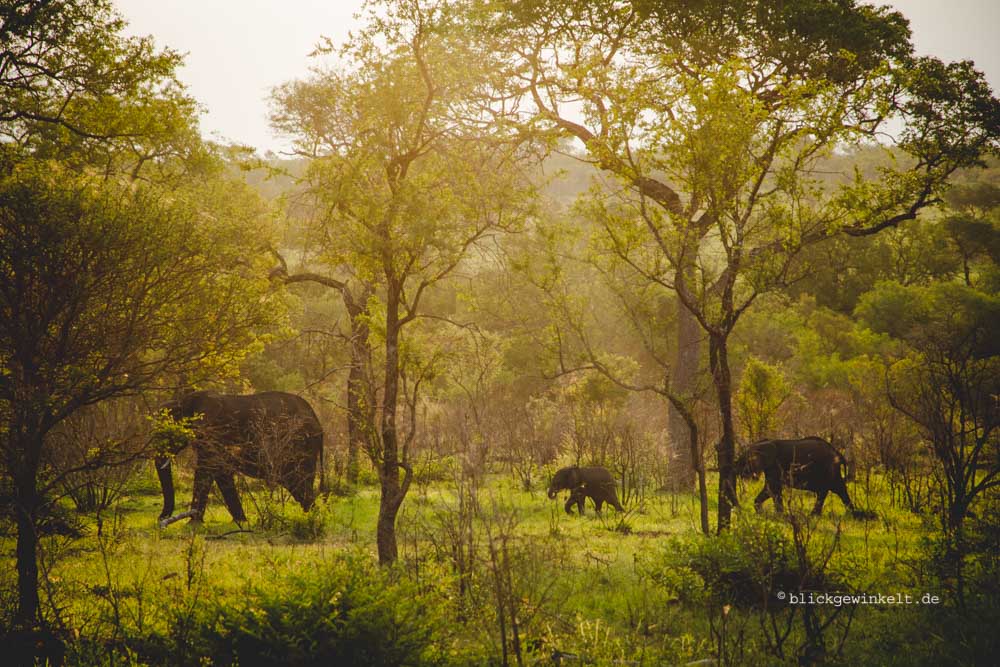 Elephant herd in the dusk

As we move into our tents, two young elephant bulls start fighting almost directly under our trees. The watering place is not far away, we can watch the herd right from the small platform in front of our tent. And for the first time, I do not want to take any pictures anymore but just want to watch these majestic animals and keep these images in my head forever. 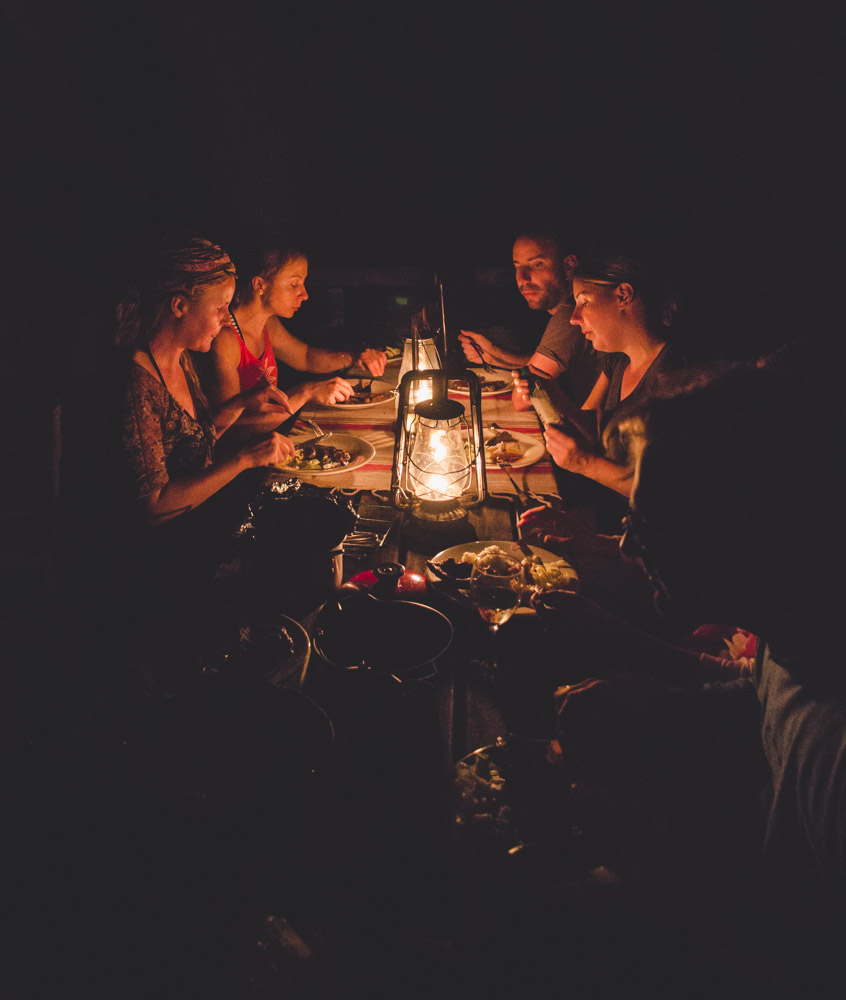 In the evening we sit around the campfire, enjoying the typical South African braai, and listen to Doug’s stories from the Wild, Wild South. Doug really gives the impression that he knows what he’s talking about. While his calm nature maybe does not make him the greatest entertainer in the world, he knows so much about the bush and its animals that I could spend hours listening to his stories and explanations. He and our tracker Albino make a great team, which do not need much talking while looking for the animals’ tracks.

Doug probably thinks of me as being a little weird with all that camera-here and iPhone-there, but he’s still nice and shows me all animal footprints he can find. Footprints of lion and elephant – guess who’s who

Finally (and with a little regret) we go to our tents, each on it’s own platform. I suddenly realize that I could very well stay here for another few days. Less driving, more walking, everything slower and a just a little simpler – I like that!

We do not get much sleep these days. In the evenings, we’re laying awake, listening to the sound of the bushland. Was that a growl? Did you here that cracking noise?

Walking Safari and what animals leave behind.

In the morning, we get up early, half past four, maybe five, because that is the best time – the animals just waking up, the sun not yet too high up, great light for photography.

Inbetween the sightings of the “big” animals, we also learn a lot about the many small animals that also do live here, the vegetation, and how you can tell what animal came across how long ago. And I also learn that you shouldn’t be too shy to watch out for (and touch!) the animals’ poo if you want to know who’s around. After all, that’s also one of the ways that the animals themselves do it. (e.g, a Rhino likes to step into and spread around it’s own faeces to mark his territory. So, if a passer-by comes around, he’s polite and keeps his poo orderly at one place, while the local bull merrily spreads his dung around. I’m glad humans have much better eyesight, and invented doorsigns instead). The light in the morning is the best, the mood is peaceful, and not even the rifles make me nervous anymore. One could almost forget where we are: In the wilderness, one of the last ones in South Africa. Fireside on the terrace – a must for the evenings 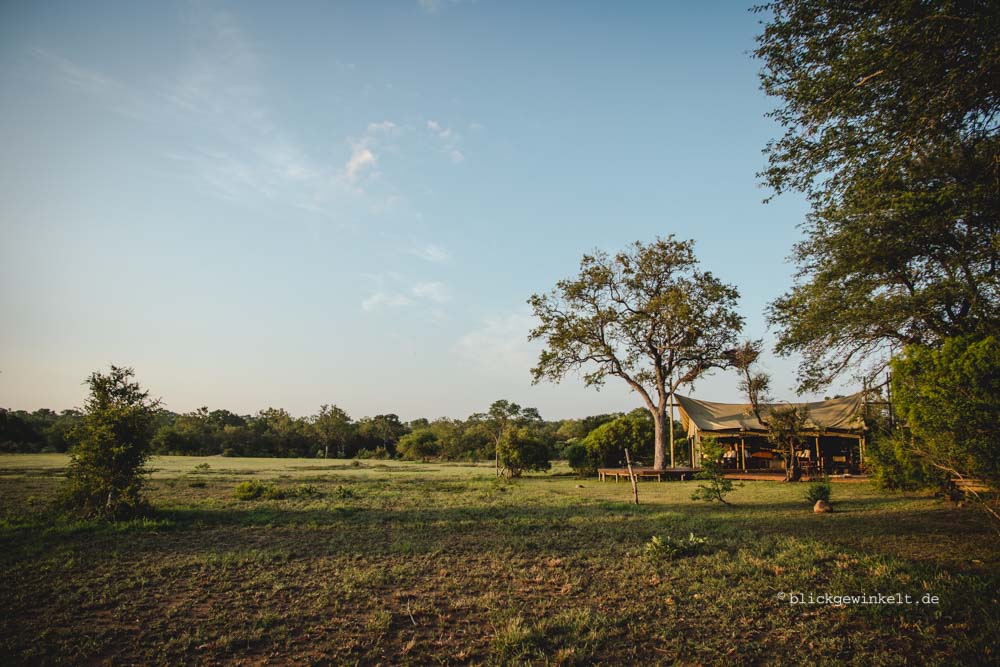 The base camp in the early evenings Longer distances are done by car 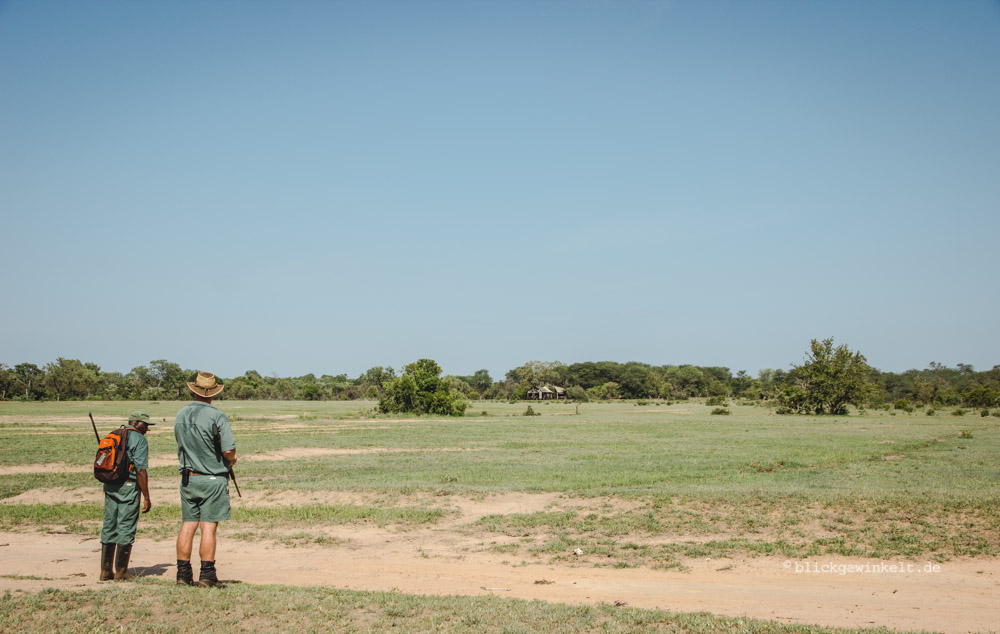 Doug and Albino in the african savannah. In the back, under the trees, is the Plains Camp.