A nostalgic Dulcie Pascoe reflects on her experience in Zululand from where she currently lives in Canada:

The praying mantis flies down and settles on my shoulder.  “That is your gogo”, Sphamandla says with a smile.  “She has come to give you a message, you need to listen to your ancestors.” A praying mantis is highly respected by the Zulu community we refer to it as Ugogo (female ancestral spirit), and believe it is a message from the ancestors.  The Zulu’s have a strong belief in ancestral spirits.  The ancestral spirits (amadlozi) speak through a Sangoma or traditional healer, I went to see our traditional healer on a few occasions.  On each occasion she gave me valuable insight into my question asked, always sound “elderly” advice.

In Zululand, uNkulunkulu is the supreme creator, he created everything as we know it, and was the first man to come to earth.  I will never forget the day “baba” (what we call an elder man out of respect) who had worked with my father for many years, was talking about all the amazing things in the world – the aeroplanes, cell phones etc.  He pointed to his tin of sardines and said that the one thing that still amazed him to this day was how uNkulunkulu got the fish into the can and then closed it.  That to him was the most amazing thing!

There are a few special holidays that are still practiced in Zululand to this day, and are amazing to participate in.  If you do have the opportunity to attend the Reed Dance (Umhlanga), held every year by countless generations on the first weekend in September, please do go.  More than 10 000 maidens from various communities take part in the event that is presided over by the King.

As the Reed Dance ceremony begins, the young women, dressed in full traditional attire, and singing, prepare to form a procession led by the chief princess as they go through this important rite of passage.  Each maiden carries a reed which has been cut by the riverbed and it symbolizes the power that is vested in nature. The reeds reflect a deep mythical connection with origin of the Zulu people, where, tradition tells us, the original ancestor emerged from a reed bed.

Zulu mythology has it that if a young woman who is not a virgin takes part in the Reed Dance ceremony, her reed will break.  As the young woman approach the gate of the King’s palace you can literally hear the crowd holding their breath in anticipation and excitement supporting the ladies to ensure that their reed makes the journey in one piece through the gates and into the arena where the King will be waiting. 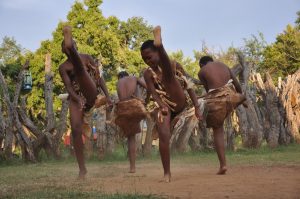 Traditional Zulu dancing is still a much revered form of art

If you are fortunate enough to visit my homeland KwaZulu (which means people from the heavens), you will be welcomed with huge smiles, and warm laughs that arise from the stomach and hospitality that you would never have experienced before. You would never have thought that the Zulu people initially were feared for their strong fighting spirit, short stabbing spears and beating of their spears against their shields. Renowned warriors in history include the likes of Shaka Zulu, who played a prominent role in various Zulu wars.  Actually the Anglo Zulu war fought in 1879 between the British Empire and the Zulu Kingdom has been called “The British army’s worst defeat against an indigenous technologically vastly inferior foe” by Wikipedia.  Don’t worry though, many generations have passed since then.  As a sign of respect many Zulus will appreciate it if you keep your hands in front of you.  For previous generations if your hands were hidden, a weapon could be concealed.

Our King of the Zulu’s is King Goodwill Zwelithini kaBhekuzulu, born 14 July 1948 at Nongoma. He is a proud man but kind and gentle at heart.  Being blessed to work with him at his palace in Nongoma and engage in the traditions of the Zulu people and the protocols and customs that are so prevalent in this ethnic group, I observed some protocols that are interesting about the King  The King is referred to as Isilo, Ingonyama.  When hailing the King the sequence is WENA WENDLOVU, WENA WENDLOVU, BAYEDE.  (Ndlovu is an Elephant)  Bayede means “Hail the King”.  Black cloth is not allowed for any draping for the King, his colours are Royal blue and Royal maroon.  When handing anything to the King it is crucial that both hands are shown, and the item should always be placed on something and not directly on your hand.   As a sign of respect as a woman it is preferred that you wear a skirt or dress.

Blessed to have been born in Zululand and believing in all the customs of the Kingdom, most Zulu people are warm and very friendly.  They are known for following a practice called Ubuntu – which means “I am what I am because of who we all are”.   Currently there are about 11 million Zulu people in Southern Africa. 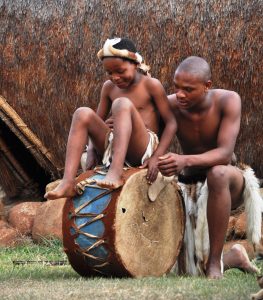 In traditional Zulu culture, the concept of extended family means that all children in your village are ‘your’ children

The Zulu family is very important to us.  Today, if you ask a Zulu what it means to be Zulu, they will reply that they have a strong sense of coming from something; of belonging; of understanding their origins.  They will express an abiding connection to and respect for their elders and ancestors – nourished by a clear identity, fervent pride and African passion.

If you ever have the opportunity to visit this wonderful Kingdom of the Zulu’s you will truly see how we have passionately held onto the values of the past, our families, our cultures, our King and our land and yet embraced a new South Africa.  We are actively educating ourselves and preparing our Kingdom for positive changes.

Shaka Zulu is reputed to have constantly pointed to the buffalo thorn (Zizphus mucronata) which has one thorn pointing forward and one pointing backwards, to remind his people to look to the future but never forget their past. In following this advice, I reflect that I am a proud “Zulu lander” with African Traces. 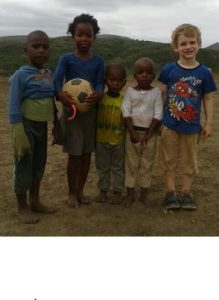