Dr Sharon Grussendorff tells us about one of her favourite wild game sightings: the African Wild Dog. 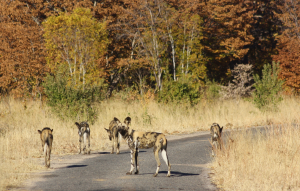 Often spotted at dawn, coming across the African Wold Dog is always a thrill on safari

When I visit a game park, one of the most exciting animal sightings for me is to see a troop of wild dog jogging along the side of the road.  It feels like winning the lottery, because this is such a rare sighting. The reason for this is that the wild dog is one of Africa’s most endangered mammal species, and is in danger of extinction, with fewer than 450 dogs left in South Africa.

Another name for the wild dog is the painted dog, because of the splash of colours on its back. The patterns are different on each dog, with a colourful mix of yellow, black, brown and white. The wild dog has large ears and a black nose area, and a tail that is usually white at the tip, changing to black and then brown at the base. 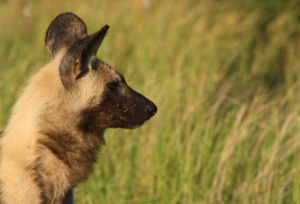 An interesting fact about the toes of the wild dog is that the middle two toepads are usually fused into one, making it the only dog to have just four toes on each foot.  They are diurnal, meaning that they move around during the daytime and night-time.

Wild dogs are very sociable and like hanging out with each other. They are excellent at group-work, as they do their hunting in packs, working together to bring down animals that are very often bigger than they are. Their favourite meal is impala, but they also eat other buck and smaller animals such as hares and rats.

Each pack has only one pair of breeding dogs, the alpha male and alpha female. None of the other dogs in the pack are allowed to breed, so they play a supportive role in the pack. The size of the pack varies from being very small (one breeding pair and their young), to being as large as 50 dogs in a pack. 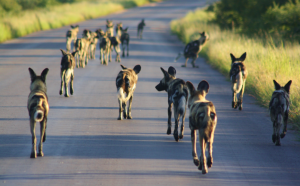 Unfortunately the population of wild dogs is declining, as more and more of their habitat is being lost to agriculture, housing and development. Although they have natural enemies that kill them in the wild, such as lions, they are also sometimes killed by being caught in snares. When they come into contact with domestic dogs they can catch diseases such as distemper and rabies, which is also contributing to the threat to these beautiful creatures.

In South Africa there are various conservation strategies in place to try to protect the wild dog population. Snares are removed in a regular basis from conservation areas. Collars are used to keep track of the movements of packs, to allow any dogs that have been caught in snares to be rescued. The collars are reinforced so that the dogs don’t choke in the snares. Rehabilitation facilities have been developed to care for dogs that have been wounded, and these are gradually reindtroduced to their natural habitat once they are fully healed. To avoid inbreeding, which weakens the wild dogs and shortens their life-span, migration corridors are opened to allow a wider range of movement between conservation areas.

Next time you are in a game park, if you are lucky enough you might also win the lottery and catch a glimpse of this beautiful but wildly endangered painted dog. 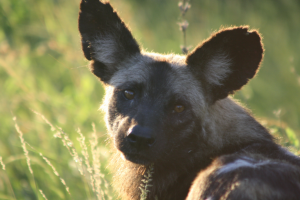